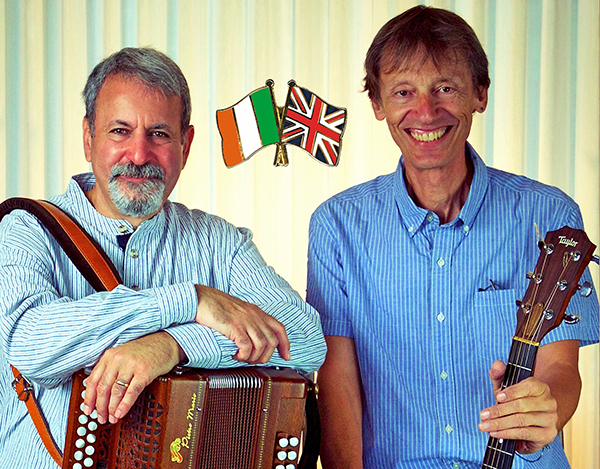 Dan Possumato has been playing Irish music for over 30 years at small and large venues
in Ireland, Alaska, Western Canada and the continental USA. He plays the not-yet-extinct
one row melodeon, as well as the two row button accordion, both in the old “push-anddraw”
manner. This makes him somewhat of an anachronism, but he enjoys it because it
is a link to all the great Irish musicians who are now gone but who preserved the music
for future generations. Dan’s four CDs of Irish traditional music have all received
favorable press and radio reviews, and tracks from these recordings are regularly played
on radio stations in Ireland, the USA and elsewhere.

London-Irishman Jamie O’Brien has been performing for a bit longer than Dan, and his
unique and expansive song repertoire is not limited to Irish, but includes other traditions
such as English, Scottish, and even Hawaiian. He has performed throughout the British
Isles, Europe, the USA and Western Canada. and he is a mainstay of the folk scene in his
adopted hometown of Tucson, Arizona. He has established a deserved reputation as a
fine singer and inventive accompanist. In 2016 Jamie’s CD Celtic Shades won the Hawaii
Media Arts BIMA award for World Music Album of the Year.

Jamie and Dan have an undeniable knack for connecting with audiences large and small, as
their musical performances seek to engage listeners in an interactive dialogue from start to
finish!