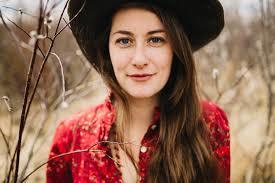 MB
Genre: Wildcrafted folk/roots
Carly Dow writes beguiling, clever songs and delivers them with insight and a powerful voice pulled from
the place where grit meets beauty. Hailing from the heart of Canada, she’ll give you a reason to dance
something to think about, and the nudge you need to embrace the wild – surrounding and within.

Carly has been sharing her style of wildcrafted folk music across Canada since 2013. With roots in
Manitoba’s music community and professional training as an environmental scientist, she knows how to
look closely and transform what she’s seen into intimate musical snapshots. Her 2015 debut album
Ingrained rose into the national top 10 charts in the folk/roots/blues category and garnered
international acclaim. Her clear, vivid imagery and enchanting melodies earned Carly a place on
renowned festival stages across Canada including the Winnipeg Folk Festival, Guelph Ontario’s Hillside
Festival, and the Bella Coola Festival in British Columbia, and propelled her international tours to Europe
and the United Kingdom in 2017. Americana UK called her “a talent – 9/10”, Vies Mag proclaimed that “it is Canadian music
at its finest”, and The Rocking Magpie (UK) said her songs are “multi-layered and bewitching”. Like her stage presence,
Carly’s music is quietly captivating, confident, and illuminating. Flirting with the line between pretty and gritty,
she delivers songs of the heart and its wide open spaces.